A boning knife is often overlooked. Choosing the best boning knife to serve your needs can elevate your cooking and preparation skills and its efficiency will guarantee you a kitchen tool that you will come to rely on. Because of its familiar shape and function, it is often confused with a carving knife, a fillet knife or even a paring knife. A boning knife specializes in meat, poultry and fish bones. It helps you skillfully slice to get most of the meat and avoid vertebrae.

Qualities of a Good Boning Knife

Specifications for this type of knife come down to its length, flexibility, sharpness and the handle.

The boning knife length is typically 5 to 6.5 inches - with longer varieties that measure from 7 inches to 9 inches. Its width is thinner than a chef’s knife and this is so that you can cut thinner slices of meat horizontally and in layers.

In the course of the research, boning knives actually come in flexible and stiff prototypes. Flexible knives come with a curved edge compared to a stiff boning knife that is straight. Flexible boning knives are the best for more pliable ingredients like fish, shrimp and poultry. Thick boning knives are used for leaner and heavier cuts of meat such as steak or ribs.

Rating a boning knife based on personal preferences depends on what kind of food one tends to cook more than others. It also depends on your understanding of what a boning knife is. If you are more concerned with handling red meat then maybe you can consider a stiff alternative. When it comes to skins of seafood and occasionally some poultry, a flexible knife should be strongly considered. If you need a more flexible knife than the already malleable flex boning knife, then a fillet knife is your go-to utensil.

Among the descriptions for boning knife evaluation, the word “extremely sharp” comes more frequently than most. In technical terms, knife sharpness is translated through degrees. Blades have the same degree of sharpness on each side to maintain balance.

When assessing the best boning knife, it is important to make a compromise between hardness and toughness because a strong knife does not equal to a knife that will last. You can determine a knife’s hardness through the Rockwell C scale and the higher the number is, the more probable that the knife can withstand a lot of pressure.

That being said, a knife that can carry a lot of weight does not mean it will not brittle over time and this why knowing the degree of a knife is important. Degrees are not simply for balance but also durability. Different kinds of degrees affect a knife’s performance.

A Rockwell C Scale for Hardness is a standard scale used by metal experts to define the hardness of a piece of metal. Scale C is the grade quality specific to knives. A metal’s rating in this kind of caliber because harder steels make better knives than softer ones. While the higher rate of steel will give you a hardened surface but has a higher chance of breaking.

The median degree for kitchen knives are 17 to 20 with the boning knife usually a degree lower under the 10-17 degree bracket because it is oftentimes smaller than a slicing knife or cleaver. However, they are perfect for slicing softer and bouncy meat. For stiff prolonged knives, they usually cut in 17 to 18 degrees and this is what makes them multi-functional, covering occasional slicing and carving.

One way to determine edge degrees is to look where the knife was made. Knife manufacturers are either Asian, American and European and because of the different kinds of staple used in typical and daily cuisine, the depiction of boning knives are also different. US and European knife varieties often have a thicker facet with a 20-degree edge that is used for a wide variety of meats while Chinese-made or Japanese knives focus solely on slicing thin layers of vegetables and fish and therefore making their facets at the minimum level of 15 degrees.

Uses of a Boning Knife

Boning knives are used during the preparation of fresh and processed ingredients. For ingredients such as meat (the term applied to poultry, red meat and seafood), they help on removing the skin, detaching the flesh from the bone or getting the most meat off the backbone to maximize the ingredient.

Boning knives can also be used as nakiri knives for vegetables and fruits as a peeler; stiff varieties can be also used as chopping or as multi-purpose knives. As for processed ingredients, boning knives can be used for shaping the dough and pre-baked cookies if baking tools are not available.

Best Boning Knife For The Money 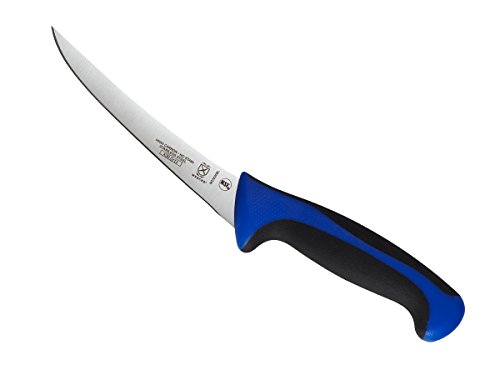 A strong Japanese that does half the work that you need. The elegant Mercer Culinary Millennia Curved Boning Knife shows the equilibrium of comfort and strength needed to prepare your food.

Made from the finest Japanese steel, the length of its blade compliments the razor sharp edge needed to get into the corners of meat bone. The one-piece high carbon steel makes it easy to use and clean-up.

The sharpness of this tool makes it work with a range of ingredients and produce. Apart from meat, it is good with bread and vegetables. Mercer continues to incorporate ingenuity in its utensils with finger points along the handle for an extra grip when additional force is needed.

Long-time care for this boning knife is strongly recommended. While the materials that make the knife already contribute to its durability, it is important for the right amount of cleanliness to be maintained with hand soap and warm water. 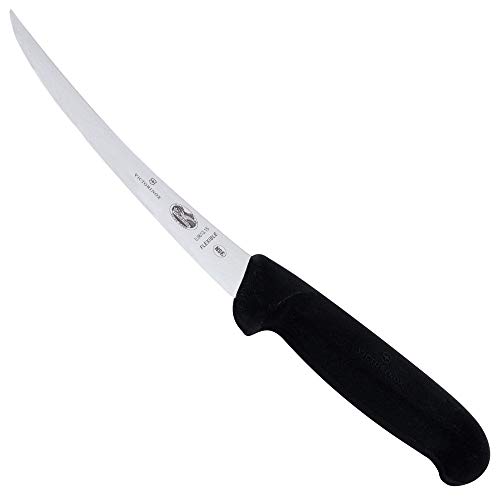 With a workable length of 6 inches, Victorinox Curved Fibrox Boning Knife is a tool that you cannot miss. The Switzerland-made utensil has a lifetime warranty and guarantees well-equipped support in your kitchen.

Victorinox’s boning knife is less flexible than most knives of this kind and therefore it can go from removing bones to carving and slicing in no time. It has the ideal length and width for routine kitchen tasks.

A Fibrox blade has a patented handle with a straight edge that is slip-resistant and textured for a balance that makes one accomplish a successful de-bone no matter how thick or thin your meat is.

What makes this knife one of the classics is how its handle is designed. It has a comfortable grip that starts from the tang to the spin and no matter the hand size of the one holding it, the function remains the same.

Apart from these outstanding features, the Victorinox Curved Fibrox Pro Boning Knife is approved by the National Sanitary Foundation (NSF) that has rated the utensil high points for being dishwasher safe and easy to clean. 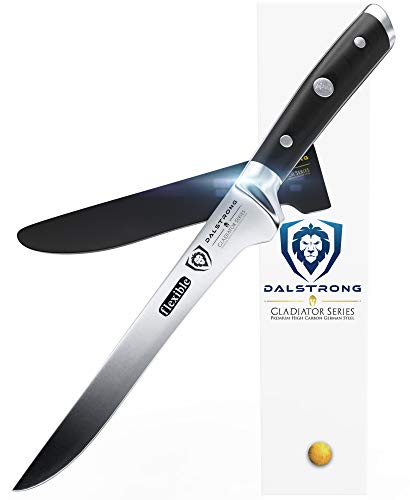 With Dalstrong’s standard length of 6 inches, this dependable knife ensures your slicing, preparing, filleting, deboning, trimming and skinning are precise every time. Its technology is made to handle all kinds of raw and cooked meat: from red meat to poultry and seafood, this tool turns you into the kitchen professional you have always aspired to be.

Its flexible blade shape is made from high-carbon German steel that can be easily maneuvered and moved through bones and joints.

The knife blade has 18 degrees with a hand polished edge that keeps the slices intact once you cut through the food. The blade has razor sharp tangs that serve as the spine for the handle which is made sturdy in case of intense friction while slicing.

With 55 Rockwell hardness criteria, the knife is expected to last for years. Its tapered finish allows the improvement of surface flexibility and minimal slice resistance. Moreover, Dalstrong has considered cleanliness in this boning knife’s production with a laminated finish for sanitation. 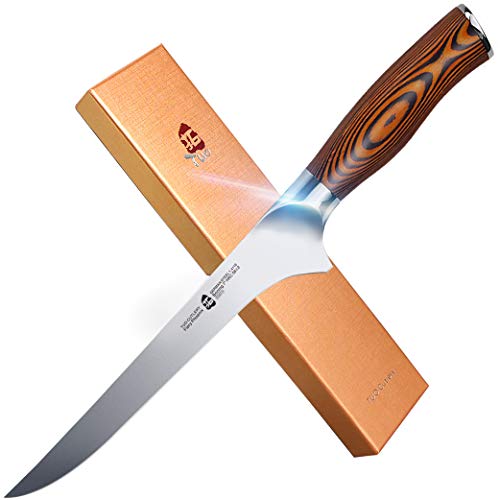 With a design and grip that are made and inspired by Chinese knife making, the TUO Cutlery Boning Knife is a cost-effective utensil that is ideal for deboning meat and skinning fish. With its narrow blade, it offers all-around efficiency while yielding the maximum amount of meat from the bone.

A 15-degree edge makes all sorts of maneuverability possible, especially when going through challenging areas such as joints where it needs a lot of pressure. It fits well in the user’s hand because of its slip-resistant handle. This prevents injuries from happening during cooking and preparation.

The overall use of the TUO Cutlery Boning Knife is comfortable, stainless and sharp due to its craftsmanship. Its power lies in the brand’s over 10 years of expertise and perfecting a portable knife set that will save your meals wherever you go.

Its high carbon German steel generates a stain-resistant finish and will protect the knife even when exposed to spillage or high temperatures.

This specific model of a boning knife is considered as some of the most precise and bestselling knives that are sold. Its classic design and high carbon steel are just a few features that tick the boxes for an efficient utensil.

The comprehensive details of the Wusthof Classic Boning Knife include full-tang and precision forged tools that have the ability to produce a sense of balance whenever it is being used for slicing and therefore the knife does not topple over in case there is an extra force exerted.

The blade is created from a Precision Edge Technology that is twice the knife’s typical edge retention and therefore yields a sharper point. In addition, the design is intentionally curved and narrow for allowance of space between the bone and the meat so that the knife glides easily and goes for a clean cut.

The polyoxymethylene handle makes for a durable hold and even exposure to the elements makes it for less weathering and more for controlled movement from the arm, wrist and hand. 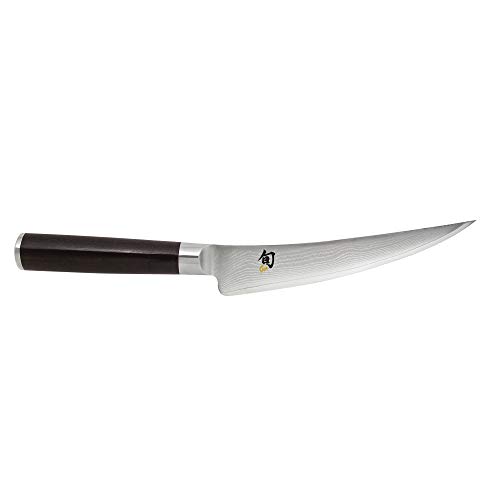 Shun is an equally esteemed Japanese brand that incorporates a V-10 stainless steel blade to be designed specifically for the functions of slicing, carving and in this case, boning and filleting.

Its strength and flexibility, with its rigid handle but malleable blade, makes Shun Gokujo ideal for beef ribs, sushi and turkey – along with other kinds of meat. It slices smoothly and is noted for the slicing experience.

It holds a 16-degree angle on its edge, which makes it sharper than the traditional European knife especially if there is pressure exerted. D-shaped handles keeps the hand secure but comfortable while slicing.

With hardened Japanese steel and 16 layers of SUS410/SUS431 Damascus steel on each side – making it not only strong but also dense to the touch.

Comparison of The Top 6 Boning Knives

The knife choices above offered distinct characteristics of what a customer would want in food preparation. My personal choice for the best boning knife would be, the Wusthof Boning Knife – determined by its slick handle, superior Japanese steel and precise cutting edge. The brand emerges from the selection of equally competitive and high-quality boning knives that are also rated in doing the job efficiently. Indeed, the perfect boning knife was determined by its flexibility and being able to adapt to each ingredient without having to sacrifice on its durability.