Japanese knives have surely become essential in any serious home cook’s kitchen, especially for professional chefs. And one knife in particular that many cannot live without is the Santoku knife.

What is a Santoku Knife?

A Santoku knife or Santoku Bocho is a Japanese style knife that literally means “Three Virtues”. In view of its uses, the three virtues of a Santoku knife are “meat, fish, and vegetables” however it is also popularly referring to the three main functions of a knife, “chopping, slicing, and dicing”.

Commonly compared with the Chef’s Knife, the Santoku is a lot shorter. It is also the preferred choice of knife for many cooks since it offers easy maneuverability and handling. Though it originated from Japan, many knife manufacturers started creating their hybrid version of the Santoku fitting all the best features of a knife from various countries.

One of the knives usually confused with the Santoku is the Nakiri knife. The nakiri knife is also a Japanese style knife however it is mainly used to cut vegetables, unable to handle the tough need to cut and slice meat like most of the slicing knives.

The Santoku knife was created as a mix between the katana (samurai sword) and the Nakiri. It is intended for multipurpose use, cutting veggies and crops, fish, and meat. See "Nakiri vs Santoku" to learn more their origins and differences.

Similarity between the Nakiri and Santoku

To create a knife more appropriate for cutting fish and meat, the Japanese retained the height and the straight of the Nakiri but they added a sheep’s foot tip. In addition to the tip, the Santoku has a gently curving edge compared to the flat edge of the Nakiri. This edge makes it ideal for the Santoku to dice and swing the knife from side to side.

The Santoku Bocho then became Japan’s most loved knife and quickly spread throughout the country’s home and professional kitchens. Nowadays, the hype for the Santoku knife grew across the world making it a popular knife of choice for home cooks, and second to the Chef’s knife for professionals.

The Santoku is often mistaken as a chef’s knife mostly because they serve the same functions and that both of them offer the same features and are also known to be the workhorse of the kitchen.

It is 5-8 inches long only which is about the length of an average adult hand. On the other hand, the Chef’s knife is 8-10 or can even stretch up to 12 inches long.

The Santoku knife is shorter and is less intimidating than a Chef’s knife. Though many chefs prefer using longer chef’s knives, the common house cook would often opt to get a santoku.

The Santoku is boxier and has a wider blade than a chef’s knife. The wider build of the Santoku is due to the fact that it was a redesigned version of the Nakiri. Vegetable cleavers are wider so that it can easily slice through bulkier vegetables like cabbages and tough root crops like carrots and radishes.

Due to its wider blade, the Santoku can easily slice through your food with better precision. The straight cutting edge of the blade maximizes your slicing with less movement and drag offering a cleaner cut.

Though the Santoku is much wider compared to a chef’s knife it is significantly shorter and thinner making it lighter and easier to wield.

It is less bulky allowing users more room for movement and easy agility especially when making quick slices. This is a preferred choice for many chefs with smaller hands since it is less intimidating and much easier to handle.

The bevel is one of the key factors that affect the sharpness of a knife. This is the tapered edge of the blade and for the Santoku, it is only tapered to one side (the unique Japanese features) while western knives are tapered on both sides.

The single bevel offers a sharper 12-15 degree angle making it possible to create thinner blades while offering the same strength and quality. Since chef’s knives are double-beveled they are much thicker and are thus heavier.

What is a Santoku Knife Used For? 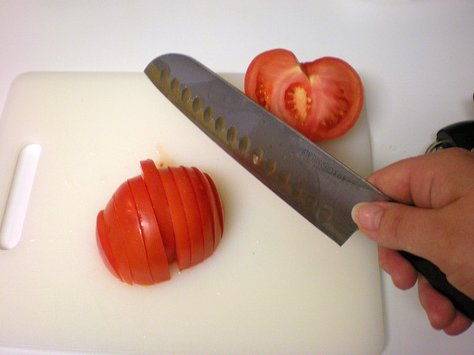 The ‘three virtues’ of the Santoku knife is usually interpreted in its three uses: slicing, dicing, and chopping. These are the three main functions of the Santoku Knife, however, it is not limited to only these three uses.

All knives can slice but unlike other knives, the Santoku can slice tough meat, delicate vegetables, and soft cheese with little drag and resistance. With its thin blade, it can easily slice through different types of food with clean precision.

Since it has a straight cutting edge with less pronounced point, slicing through is easier than a chef’s knife. It also minimizes the need for you to pierce the food to have a room for slicing.

The Santoku knife promotes a straight cut and lift motion, due to its even cutting edge, it doesn’t promote the rocking motion needed to dice or mince food into smaller pieces. However, many manufacturers created a hybrid Santoku knife with a slightly curved edge to allow the knife to have a more fluid rocking motion.

This is one cut that is a bit difficult for a chef’s knife to do. Filleting needs a thin single-bevel knife to perform a clean cut. The Santoku is ideal for this job. 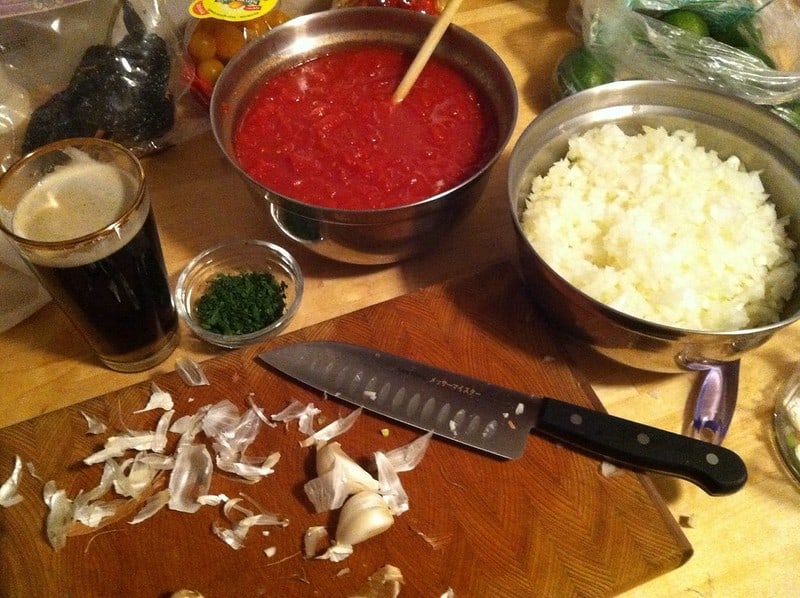 Scooping food off the chopping board

The wider blade of the Santoku allows you to scoop food off the chopping board and straight into your pot or over your food for garnish.

The Santoku knife is a multi-purpose knife that allows you to perform all sorts of cutting and slicing but with a sheep’s foot tip, it can also spread butter without a hitch.

Separating Bones through the joints

The advantage of the Santoku over the Nakiri is the tip, with a tapered tip it can pierce through meat and cut tough cartilage, tendons to easily separate bones. Plus, it can also be used as a boning knife to debone meat with little resistance.

The Santoku knife is a real workhorse tool for the kitchen. Sticking to its promise in delivering all sorts of cutting and slicing needs, the Santoku is indeed an all-around knife for multi-purpose and versatile use.