Taken from the Spanish term, flan de leche, the leche flan is a rich and creamy dessert. Its basic ingredients are milk, sugar and eggs. This sweet confection is served to large groups of people during special occasions and get-togethers.

It has its variations in other parts of the world: Asia (Japan, India, Malaysia, Vietnam), Europe (France and Spain), Latin America and the United States, where it is served in smaller quantities and condiments.

Components of a Leche Flan

Sugar. This ingredient is placed in a pan or ramekin/llanera under low to medium heat and turns to a brown caramel that becomes the base of the flan after the custard is poured.

Caramel. This is the hardened syrup formed when sugar is heated at the bottom of the container where you put the flan in. Leche flan can have either a dry caramel or wet caramel.

Dry caramel forms when only sugar is cooked under the heat to melt evenly. Wet caramel, on the other hand, is sugar with water/milk or corn syrup that makes the consistency thicker. Caramel runs the risk of being burnt so it is important to watch over it. For the recipes below, we have focused more on the wet caramel.

Eggs. Leche flan uses the yolks and white of eggs independently. In some recipes, more egg yolks used make for a richer and softer flan while more egg whites make it bouncier and firm. Depending on the ratio between the yolks and egg whites in the recipe, the finished product will be a balance of textures.

When cooking the custard, it is important to mix the custard by hand using a spatula as a good assurance that it would not be over-mixed. Stir it occasionally until the egg yolks are fully incorporated into the milk and sugar or else it will easily crumble after it is cooked.

Milk. Evaporated or fresh cow’s milk is the type of milk commonly preferred when making leche flan. For an additional sweetness, condensed or coconut milk is used. Most often, a combination of two or three types of milk will be used for taste.

Additional Ingredients. Several flavors can be used to create different variations of leche flans. Banana, vanilla, chocolate, pandan, cream cheese and coconut are just a few of those ingredients.

Steaming has been a common method in making Philippine desserts, adapted from the Japanese way of creating steamed custard.

How To Steam Without a Steamer:

Tip: If following this recipe for leche flan, put the llaneras or ramekins inside the heatproof deep dish to steam.

Step 1: Add 6 egg yolks into a bowl, add 300 ml or 1 1/3 cups of condensed milk and 180 ml or 1/2 cup of evaporated milk into a bowl then mix thoroughly. Add 1 tsp of vanilla to the mixture. Stir the mixture until it is fully blended and then set it aside.

Step 2: Add 1 tbsp of sugar and 1 tbsp of water at the bottom of a medium-sized llanera. Simmer the mould above low fire using tongs to melt the sugar and water. Continuously swirl the llanera using your hand.

Step 3: Once the sugar caramelizes to a deep brown, remove from the heat to cool down.

Step 4: Pour milk mixture into llanera and cover it with foil. Place the covered llanera in a steamer and cook it for 40 to 45 minutes or until custard sets.

Step 5: Let it cool for 5 minutes and turn the llanera upside down on a plate. Makes 3-5 servings.

Baked leche flans are now desserts for delight. The custard is firmer and the flan itself gives away a chewy texture that goes well with the slightly burnt bitterness of the caramel.

Step 1: Preheat oven at 150℃/302℉ and prepare boiling water for the steam bath later in the recipe.

Step 2: Stir 250 mg or 1 cup of fresh milk and 58 g or 1/4 cup of sugar in a saucepan under low heat. Whisk the mixture lightly until the sugar is dissolved then set aside to let it cool.

Step 3: In another saucepan, mix the other 58 g and 1/4 cup of sugar with 3 tbsps of water. Let the syrup cook until it becomes a golden brown caramel. Remove from heat immediately for it not to burn and also set aside.

Step 4: Brush small-sized ramekins with softened butter and quickly pour in the caramel inside the ramekins.  Make sure that you tilt the ramekin slightly for the caramel to be even at the bottom. Set aside.

Step 5: In a mixing bowl, combine 3 eggs, 1 tsp vanilla extract and the milk mixture. Whisk the custard thoroughly. Transfer the mixture to a measuring cup using a strainer to make sure that no egg solids are left.

Step 6: Pour the custard over the caramel in the ramekins.

Step 7: Wrap each of the ramekins’ top with foil and place it in a deep baking dish.

Step 8: Bake in the preheated oven at 150C/302F for 45 minutes. Pour hot water in the deep baking dish that contains the ramekins and then put the dish in the oven.

Tip: Use a baking thermometer to cook the leche flan at the right temperature.

Step 9: Remove ramekins from the oven and turn it over on a plate. Serve hot. Makes for 4 servings. 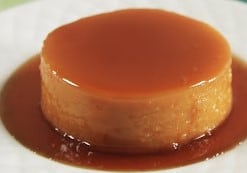 The recipes mentioned show different ways of making leche flan. A leche flan’s components – sugar, water (for the caramel top) and milk, eggs (for the custard) are basic dessert flavors that still hold up to their own taste even if other ingredients like chocolate, coffee and coconut are introduced.

Step 1: In a saucepan, put 1/2 cup of sugar over medium-high heat. Add 2 tbsp of corn syrup to the sugar and let it caramelize for at least 10 minutes. When it turns into a dark amber color, turn off the heat and then pour the syrup quickly at the bottom of four small ramekins. Set aside.

Step 2: Preheat oven to 176℃/350℉. To prepare the steam bake, line the baking pan with paper towels. Also set aside.

Step 3: Make the custard by whisking the 7 egg yolks, 1 egg and 1/2 tsp vanilla extract in a mixing bowl. Slowly add 1 1/4 cups of condensed milk, 1 cup evaporated milk and 2 tsp of coffee. Mix well. Once done, strain the custard in a clean bowl.

Step 4: Pour custard into ramekins and then place them in the baking pan.

Step 5: Carefully pour about 1 1/2 cup of hot water or until the water comes to a third of the height of the ramekins in the pan.

Step 7: Once it is out of the oven, let the ramekins cool on a rack. Remove each ensaymada of the ramekins and serve with a 1 tsp of coconut sugar sprinkled on top.

These are some of the many different sides of leche flan. Its three ingredients of milk, sugar and eggs can be altered to your personal taste. You can use them as a base for unique flavors that challenge your creativity. It is a dessert that is great for those special occasions. We hope you enjoyed this recipe as much as we did. Happy cooking!