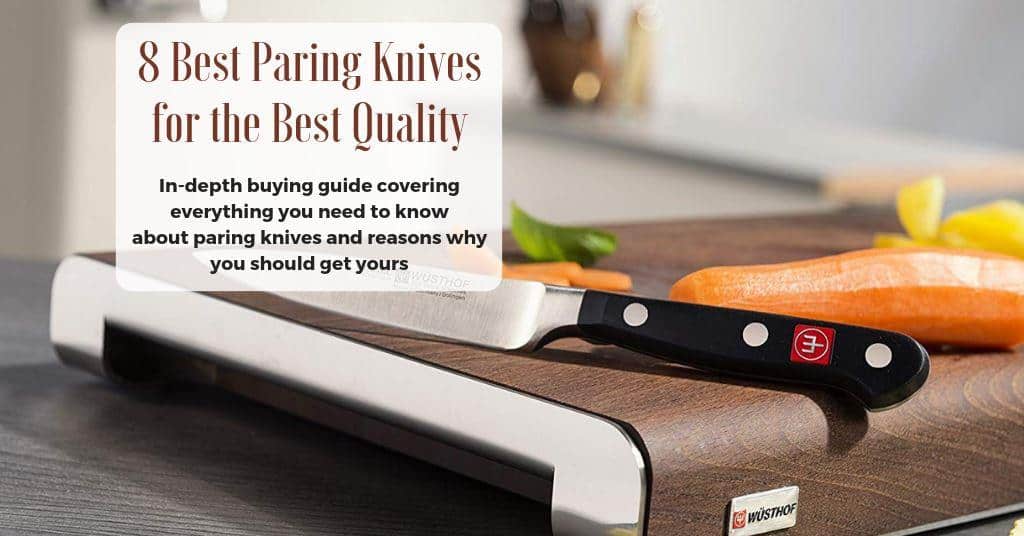 Are you on the lookout for the best paring knife? Do you want to get a knife that suits you and your kitchen needs like peeling your favorite fruit? With a regular knife, peeling fruits and vegetables is troublesome. Even carving your Jack-O-Lantern’s face could turn out to be a hassle if you don’t use the right tool. There are so many knives that you can find in the kitchen. Some are big, and some are small and each one is for a specific purpose but for those little touches that need a sharp end and a small tip in order to get the tiniest corner, none is best suited than the paring knife.

Why You Should Start Using Paring Knives

It’s always better to opt to be more practical when it comes to buying your paring knife. In other words, most of us would prefer to spare the expense and save more money by choosing the tools with the most affordable price possible as well as getting value for our money. Here are the main benefits of getting a high quality paring knife:

Characteristics of The Best Paring Knife

It’s not easy to pick the right paring knife that will fill your needs. There are certain factors that you need to consider when buying a paring knife.

Although all paring knives are small sized comparing to other types of knives, there are still different sizes among paring knives. It is preferable to look for three to three and a half inch range since we found out in our tests that it’s the right size that matches almost anyone for better versatility.

There are two criteria you need to look for when it comes to the blade of any paring knife.

What separates high quality paring knife from the low one is the sharpness. You need to look for one that’s precisely sharp to secure clean cuts, trimming, peeling, etc. When choosing a paring knife, double check its cutting edge, the tip needs to be very sharp while the blade itself must not be soft to not lose its sharpness quickly for the long run.

Material and Thickness, these are the two factors that determine how strong and sturdy the knife can be. It is important to choose a knife that built with high quality materials such as high carbon stainless steel, which is considered to be one of the best materials to manufacture high resistance and durable knives that can withstand any pressure applied to them from the daily overuse while maintaining their sharp cutting edges.

It is crucial to go for a paring knife that has neither a complete round nor a flat handle. While paring knives, in general, come with either wooden or plastic handles, it is important to choose one that’s thick enough for you to hold firmly and control easily. Also, avoid knives that have texture coating to prevent slipping during use.

The term full tang refers to the 2 handles been pinned on the blade. Why is that? It’s done to allow the blade to extend into its handles to secure a firm hold for long use. A non-full tang knife or even half tang paring knife can easily break in your hand under pressure during cutting or slicing which can very dangerous.

What Type of Paring Knife Do I Need?

So how do you know which paring knife suits you and your kitchen needs? Like most people, you might not be aware that there are four types of paring knives. If you check online or go to a physical store, you will notice that each paring knife looks different from the other.

So before we go to our list for you to be able to find your best paring knife, it would help to take a crash course on the types of paring knives so that you would be able to gauge what exactly do you need before hitting that checkout button.

Based on the name, the spear tip paring knife looks like the other half of a spearhead. The spear tip paring knife is first on the list because it is the most commonly known and used among the paring knives. It is also known to have multiple purposes. Included in the list is coring. Coring is removing the seeds and the tough part in the center of the fruit, otherwise known as the core. Other uses include slicing small ingredients, peeling and

The spear tip blade is short and has smooth edges designed for peeling fruits and vegetables with skins that are not too thick. The short length of the blade and the handle makes it easy to maneuver, taking with it the thinnest layer possible. You wouldn’t want to peel more than just the skin of the apple. Otherwise, there wouldn’t be much of the fruit left for you to eat.

The bird’s beak paring knife has a design which looks like, yes, a bird’s beak. The edge of the blade is smooth and slightly hooked downwards. It is also a short bladed knife with a short handle, classical of a paring knife.

Aside from a Bird’s beak, another paring knife inspired by an animal part is the Sheep’s foot paring knife. How do you tell if a paring knife is a sheep’s foot? We now know that the spear tip and the bird’s beak both have distinct curves. The sheep’s foot doesn’t. Its blade is flat which can be used for cutting thin slices from different types of small ingredients like cheese, tomatoes, cucumbers, etc.

The intended purpose of a sheep’s foot paring knife is julienning which means cutting vegetables or fruits into long thin strips. The sheep’s foot design is also helpful in safety measures when julienning.

Best Picks For Each Type of Paring Knife

Most of us prefer a product’s quality, performance, and guaranteed longevity to save on money. Listed below are the best picks for each type of paring knife. 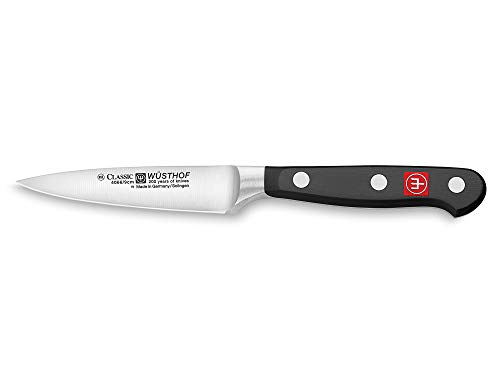 For under $50, Wusthof’s high carbon steel paring knife has received top reviews from both chefs and household cooks. Hailed as a high-end knife, this could be a perfect choice.

The high carbon steel blade guarantees that this knife stays sharp and resistant to rusting, built to withstand the test of time. It is a well-balanced knife that has an excellent quality, control, and feel to it. This paring knife is hands down the top pick of the spear tips.

If you want to opt for other good alternatives which deliver more or less the same quality for a lesser price, you might want to try this paring knife from Victorinox.

For just under $10, this knife boasts enhanced accuracy and precision. It is lightweight which makes it easy to handle and control. The Victorinox paring knife is also intended for a lot of purposes from simple to more complex tasks that require precision.

Don’t be fooled by the price. This paring knife from Victorinox does not disappoint based on its outstanding performance. At a very affordable price, you don’t have to spend more than $10 to get a good quality spear tip knife. 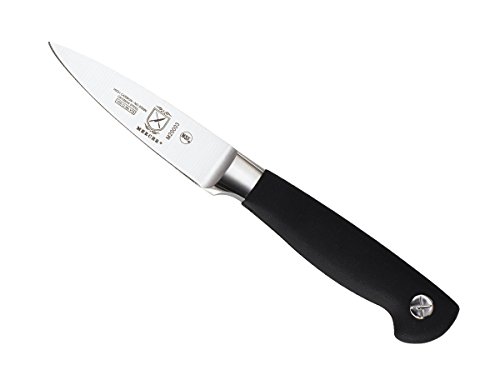 Another spear tip paring knife that made it into our list is from Mercer. Priced below $40, it has a fair share of impressive features worth considering. It boasts of efficiency and stability. One disadvantage is the heavy handle which makes the cutting experience awkward for people with small hands and those who are used to using lighter knives but they are sturdy for those who are used to carrying heavy knives.

Overall, if you’re not too bothered by the weight of the handle, the Mercer Culinary Genesis may just as well be the perfect substitute of the top brands for a much lesser price.

This type of paring knife is the least common of the three. Generally used for food aesthetics, the utility of the bird’s beak is quite limited but it is still a good type to have if you are building your cutlery artillery. Here are our best picks for this type. 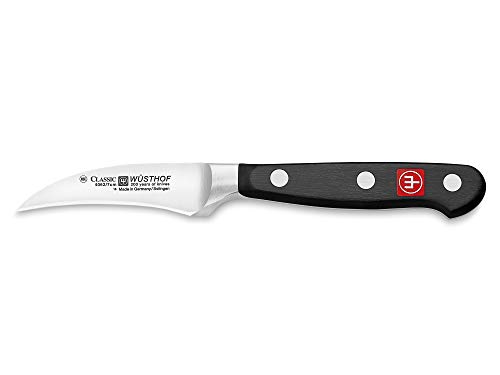 Made to design food in intricate styles, the hook of the Wüsthof makes it different from the others. It’s not too curved which gives it a more subtle design. Sturdy and well-built, the elegant design allows a comfortable grip with more control. 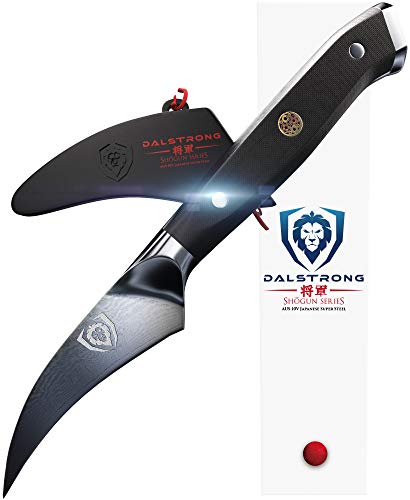 This knife looks very nice and not only that, it also cuts and peels fine, too! This Dalstrong knife of the Shogun series boasts a very sharp blade made of 100% Japanese steel. Its bird’s beak can resemble a scalpel in its sharpness and resistance. It has twice the edge retention of other knives and has rockwell hardness.

It is very nice for doing a lot of things around the kitchen. It is good for peeling, slicing and dicing mushrooms, apples, pears, etc.

Sheep’s foot paring knives are less common probably because a lot of people would use bigger knives that can do the same job.

In this list, we’ve included three sheep’s foot paring knives that are recommended by users and by experts. These are based on their quality and maneuverability. 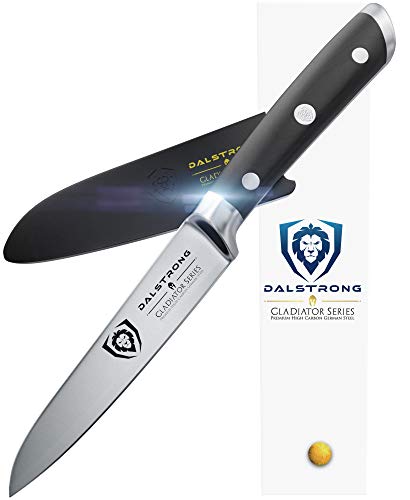 This piece from Dalstrong is said to be a popular choice among consumers. For under $30, the shape and design of this knife are perfect for julienning and slicing.

Another plus for this knife is the blade made of high carbon steel. It also boasts of a handle made from imported black pakkawood, designed for easy and comfortable maneuverability. It also has a smooth finish and the packaging is cool and neat. The handle has a comfortable grip and design.

If you’re on the lookout for a lower priced but good quality sheep’s foot paring knife, then Victorinox has the perfect piece for you.

Compact, sturdy, and for a price under $10, this knife has more value for your money. Also boasting with great reviews, you don’t have to splurge on an expensive sheep’s foot paring knife. This one from Victorinox could suffice your kitchen needs. 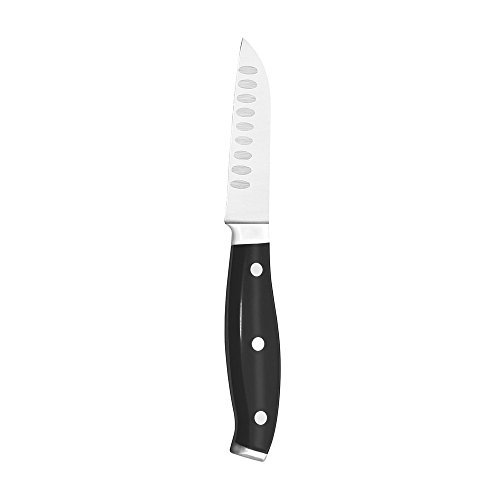 If you prefer slightly heavier knives to help your control, then this knife could be your sheep’s foot paring knife of choice. The hollow ground design on the sides of the blade serves to resist food sticking on the knife when slicing. For some, this is not necessary. But some may find it a bonus for the overall performance of this knife.

Comparison of the 8 Best Paring Knives

Common Questions I Get Asked About Paring Knives

What is a paring knife?

Paring knives are one of the small utility knives that are used for trimming, peeling, slicing, cutting fruits, vegetables, etc. They are not only used for kitchen purposes, but they are also used in a variety of ways thanks to the versatility they offer.

How long is the blade of paring knives?

Most paring knives have blades that range between 3 to 4-inch long which is around 7.62 to 10 cm. Paring knives are meant to be small and short to cut and reach areas the bigger knives can’t.

How do you cut with a paring knife?

There are no limits in using paring knives. There are many ways you can use them for cutting, slicing, etc. It completely depends on what you want to use them on. Here is a creative video that will help you learn new tips and tricks on how to cut with a paring knife.

Among the variety of paring knives available in the market, it is up to us and our preferences to choose which is the best. The best paring knives listed in this article are recommendations for each type. We hope this has helped you with your choice of the best paring knife that’s suited for you and your kitchen needs.

Scroll back to top